The term ‘free and fair’ becomes an important catchphrase to explain the standards of democratic election and to measure the success of an election. Malawi goes into a fresh presidential election this year. Does Islam accept ideals of democracy or is democracy compatible with Islam?

As regards to compatibility of Islam and democracy, one renowned scholar of Islam Al-Qaradawi argues, that democratic principles are in harmony with the essence of Islam as both of them reject tyranny, oppression, and absolutism.

However, democracy is not the equivalent to Islam itself, since democracy is man-made ideology, lacking moral, and spiritual aspect. Therefore, the important matter in this article is not to equate Islam and democracy, but to look into some principles of democracy that correspond with Islam.

Firstly, Islamic law is similar to the democratic principle in maintaining that the government’s power must be limited and it must always be accountable to the people. Islam supports the idea of separation of powers between various government bodies to ensure checks and balances in government actions.

The Prophet of Islam Muhammad (Peace be upon Him) for instance, appointed different Companions (May God Almighty be pleased with them) to hold judicial and executive position when he sent them as officers to various provinces.

Secondly, Islam strongly support individual freedom as God Almighty Himself honoured sons of Adam (human race) as He said in the Noble Qur’an, “And indeed We have honoured the children of Adam. (17:70) The Noble Qur’an give emphasis on the duty of a man towards others in protecting their rights.

Thirdly, in the practice of representation, the Prophet Muhammad (Peace be upon Him) asked seventy-three of the pilgrims of Madina who joined the pledge to support him to appoint twelve representative to lead them.

While Malawi goes to polls to elect president in a fresh presidential election, it is important to note that Islam provides general principles on the concept of free and fair election. Such principles include separation of powers for instance giving the electoral body powers to be independent. Mighty of all, respecting the will of the people as they decide leadership of their choice.

Discover Islam, therefore, anticipate that political parties, non-governmental organisations, civil societies, faith groups, courts, will expect formation of the highest office of the land that would be derived from the will of people of Malawi and subsequently respect the outcome.

Conclusively, even though democracy originated from Western civilization – since the ancient direct democracy era to the modern representative democracy – the essence of democratic ideals undoubtedly was already taught by Prophet Muhammad (Peace be upon Him) since more than 1400 years ago. 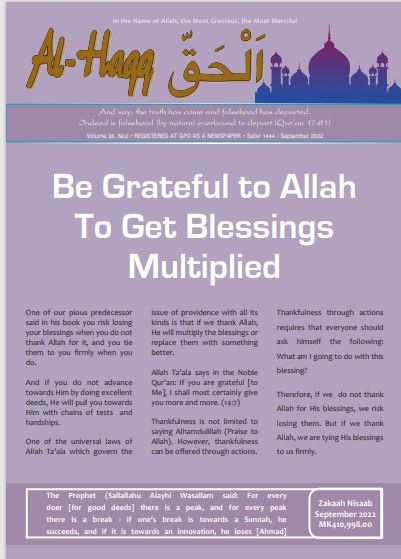