The 17th of June was a watershed moment in Malawi’s ability to unite. The Public Affairs Committee’s (PAC) recommendation on Hijab is at the highest level of a civilized nation. Because unity and progress are synonymous, the achievement of oneness propels development and progress forward.

The focus on unity in this article is a deliberate choice, as communities and societies must keep up with the pace of growth to achieve progress, prosperity, and stability. As a nation, we should develop a sense of oneness in all aspects of our lives in this regard.

Specifically, a prevailing unity for growth ensures individual and societal rights, specifies responsibilities, and establishes the necessary foundations. People are encouraged to pursue information, work hard, and be resolute on such foundations. As a result, societies will be proud of their country’s achievements.

Unity is a relationship of cohesiveness and collaboration among people, according to Islam. The partnership is built on the divine vice-regency vision’s ideals. This worldview emphasizes the importance of man’s rights and dignity, as well as his place in the universe. Everything in the universe is at man’s disposal. This is for him to achieve the big goal for which he was formed, which is to save the world.

Because of the variety, we talk of togetherness. We belong to several tribes, religions, and civilizations as a nation, and this is our own identity. They resemble many flowers in a garden. In this sense, we must set aside our differences and work together, as we are all citizens of the same country.

The seeker of oneness must recognize that diversity in all of its forms is a creation of God Almighty. “O Mankind, indeed We have created you from male and female and made you peoples and tribes so that you may know one another,” says Lord Almighty in the Noble Qur’an. In Allah’s eyes, the finest among you is the most upright. (49:13)

Taking into account people’s uniqueness and diversity, unity must be built on a consistent, specific foundation, which will increase acquaintance, collaboration, and understanding of rights and responsibilities. Unity is the only way to ensure coexistence and harmony.

Unity is fundamental in Islam, and it should be in Malawi as well. The secret to any nation’s success, including Malawi’s, is the members’ mutual togetherness. We appreciate PAC for bringing Malawians together by recommending that Muslim students in schools wear hijab. 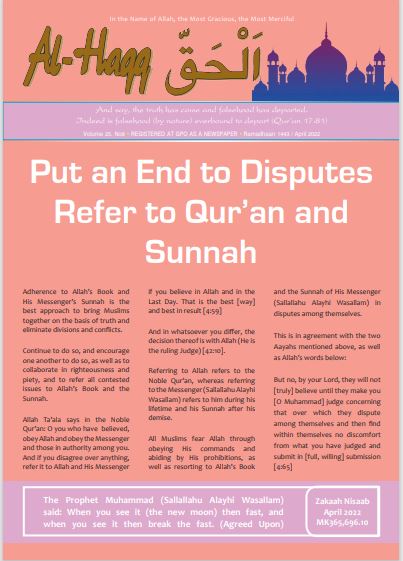