Reaffirming our disapproval of going against life

Published in The Nation on Sunday

As nothing is meaningful without life, we begin the year 2018 by reaffirming our disapproval of going against life, evident in its ever-ending efforts to have it billed. Islam is for pro-life; hence legalizing termination of pregnancy is only viewed as loss of upright moral direction.

Unequivocally, the Noble Qur’an, divine command of Allah Almighty sanctifies human life. Killing any innocent person – irrespective of age, moment or religious orientation is condemned in the firmest language:  “And do not kill the soul which Allah has forbidden to be killed except in the course of justice.” (6:151)

We are writing as reaffirmation because in September 2014, this column cautioned those who championed the idea to reverse the laws of Malawi that prohibit abortion to become a legalized window. We retaliate that the conceived idea is retrogressive in nature, and invitation to the wrath of Allah Almighty.

Commonly, the arguments put forward for those who are pro- abortion revolves around the notion that it is an individual choice. However, for those against, strongly believe that the issue of abortion is not private. It directly involves life of another person and therefore becomes a concern for morally guided society.

With ridicule those who consider abortion as a choice sometimes are overwhelmed and agree that “unborn are human beings” even though they add that it is irrelevant to the issue of women’s right. Arguably, how can someone’s humanity be irrelevant to the question of whether someone else has the right to kill him?

The fact that we are living, we deal with the issue of abortion with less caution. We forget that life was preserved for us to be what we are today. We wouldn’t be activists advocating for abortion if our mothers decided wrongly. With this in mind, it is the duty of a human being to be pro-life.

Whenever we discuss the issue of abortion, we should always keep in mind that we are discussing the death of a pre- born person, usually with a discerning heartbeat. That’s why pregnant women announce, “I’m expecting a baby.” With such view we would be hysterical.

In our reaffirmation, we once again say, “Every conception is legitimate, and every pregnancy is desired and wanted.” In Islam there is no such a thing as unwanted pregnancy. Every child is regarded as a great gift from Allah Almighty.

People often fear that having more children will make them poor. Allah Almighty says, “Do not slay your children for fear of poverty. We shall provide for them and for you.” (17:31) Above all the right to life is God- given. No human should take away that right.

Life is sacred, and hence must be honoured and promoted. Having children is a shared right between spouses, and hence neither spouse should obstruct that right before or after conception. 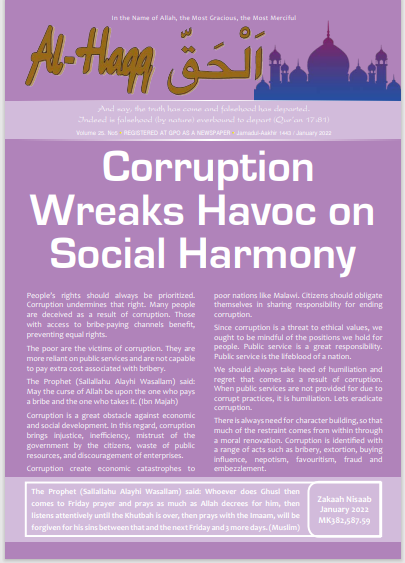